This Ranger Station sounds interesting and on the way I can check the dock cranes. I check supplies and head out of the Skadovsk. It’s very early, not even 5am, when I leave. The air is moist and thick with life. I check the PDA and head on.

I meet some stalkers. There seems to be a few different ‘fashions’ that identify them in different ‘factions’. Free stalkers are generally in jeans, boots and a parka. Those that mostly work for Sultan wear clothes like him: trenchcoats, face-masks and big black kick-ass boots. Some of those dress like commandos but in the same brown and black colouring: balaclavas, web-gear, combat boots, fatigues. These guys look like stalkers.

“You now anything about those chopper crashes?”

“One landed on the southern plateau. Only Noah knows how to get up there. He’s in that crazy old barge with the windmill.”

“Hahaha… make sure he doesn’t blow your head off when you knock on the door.”

They walk off laughing and won’t share the joke. I figure maybe it’s literal. So I check the satellite image of the are on my PDA. There’s another wrecked barge that I’ll be able to see from the dock cranes. I decide to follow the pipeline to the cranes. Following the pipeline I reach the dock cranes. They are strangely forlorn and I look up from underneath thinking they must have moved massive amounts of cargo. Each crane is enormous.

I get the feeling there might be some tools here. I check the rundown shed. The door is locked. I blast it with the AKSU but there’s steel plating behind the plywood – or something. I briefly consider a grenade but I’ve made enough noise already. I skirt around the dock and a box catches my eye down near the water. I head over but it is just trash. From here I get a decent look at Noah’s barge. I wonder if he calls it an ark?

Heading north again I head up a steep bank and see Beard’s guys waiting for me. 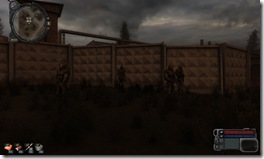 They set off at a run when I say I’m ready then slow down to sneak in the gates. A small round building that the pipeline runs over the top of is their destination. They all take cover and the leader goes inside the structure. I follow him and he whispers, “Let’s see what they’re up to.”

I can hear people in the high building which looks like a plant of some kind. They’re talking about artifacts and trading them for high-tech weapons. One of them says, “Anything Duty of Freedom can get, I can get.” That seemed to please the people.

Suddenly someone’s  yelling grenade and I’m running out of the round building. Beard’s guy some how jumps through the window. The others flank right so I flank left. There’s a big old sign-board that blocks my running. I get around the doors into the workshop and lob a grenade of my own in there. I hear someone go down.

I peek around to see if I need to shoot and one of those commando guys in Sultan’s colours is there trying to shoot one of Beard’s crew. I blast him with the AKSU and he drops instantly. Beard’s crew call the all clear and I go in to get dibs on the loot. Beard’s crew don’t seem interested and I realise they probably got the artifacts already. At least my armour was only nicked by two rounds. Other than that I was unscathed.

One of the guys was in exoskeleton. I check him out.

His PDA survived and his name was Morgan.

I talk to the leader of the raid and we’re all done. Beard’s got my reward. I check my PDA and see a stash marked on there. It’s right next to the building I’m in: which I figure as a train engine foundry. Over to the nearby building I go.

Up the ladder I find the stash. A few boxes of shells and a fancy Italian assault shotgun. I like the look of that. Wonder what Cardan can do for this beastly weapon?

With that in mind I leave the stink of ruptured bowels and drying blood. I can hear blind-dogs coming already. Faster I travel back to the Skadovsk. Beard gives me a few thousand roubles and mentions that he’s looking for specific artifacts but that the orders change. So it’s better to have the one’s he needs at that time. He’ll pay more than the normal rate when they’re on order. I keep that in mind. With the cash I make from looting the trader and the various people there I think a visit to Nimble is in order.

Cardan does some mojo on the SPSA14 but he needs two bottles of vodka to get going. I just add it in to all the future costs of doing business with him. There’s still a lot of daylight when he’s done so I decide to do some artifact hunting.

I’m barely off the Skadovsk and there’s shooting, tracers and crying of wounded. Seems Sultan’s faction are attacking Beard’s faction on sight. I head over to loot what’s left and ice seeps into my blood as I hear a growl. I turn and see the snork coming for me. They scare me so much… The new shotgun does it’s job but not before the snork’s clawed a decent rent in my leg. I patch myself up and scavenge off the battle. One of Sultan’s guys has a very slick TRS 301 Israeli version of the M16. A good find. I head straight back into the Skadovsk and trade my gear, buy ammo and get Cardan to upgrade the rifle whilst he’s still under the effect of two bottles. He’s happy with that.

The burnt farmstead is close and has lots of burner anomalies. I wanted to head there from the start. Crossing the swamp is a bit dangerous. Many creatures on the prowl but mainly flesh and hogs. They weren’t too aggressive in the heat of midday and I make it to the farmstead peacefully.

I find two crystal artifacts and a wrenched anti-radiation artifact. What a find. This will make all the difference. Nothing like hearing your Geiger-counter going off it’s traps and your exposure card inside your helmet is still barely pink. Another signature is detected on the edge of the Bear’s range. I track it for a while and walk into a burner. My armour holds up pretty well because of the crystal I had activated. I follow the signature and there’s a massive scary crack in the earth. The artifact will be in there. I hear burning and a flame-poltergeist is doing laps in the caverns. The whole hillside must be riddled with them. Maybe I’ll go in there when I have better flame-retardant on this armour suit of mine.

I check my PDA and see another stash marked nearby. A place called Izumrodnoya. It’s an old children’s camp complete with stage. Really spooks me out. I hear claws on concrete up ahead and I hide behind one of the cabins. Two pseudo-dogs run past on something’s trail. I wait with the shotgun trained on where I last saw there tails.

After about 8 minutes I check my PDA and see a sawmill is not too far. Might be tools there for Cardan. I cross the river on an old bridge and three blind-dogs come sprinting out of the brush at me. The shotgun puts out buckshot very fast and I’m impressed by the amount of firepower I now have in my hands. The mill is ahead but I can hear babbling from cracked throats. That means zombies: those poor stalkers who’ve had their minds melted by controllers or psi-anomalies.

I sneak up with intent to put a few out of their misery – and my way. Geiger counter starts ticking like crazy as I get near a shipping container. Must have been covered in fallout. Then there’s three zombies coming for me. I blast one and hide behind a pine tree. It fires and the rounds splinter wood into my eyes so I duck out the other side and blast three shells of buckshot at it. It drops.

Panic rises up and I head into the sawmill. The roof is no good so I look for somewhere else. I ask the person making announcements. They say there’s a drain under the road to the south of my position. I start running. I almost cry when I see three snorks demolishing a team of stalkers. I have to go through them. The SPSA14 does its work but I’m cut up bad. Bandaging myself I keep running and make it into the drain. I’m still running on adrenaline and half-expect more snorks to be in here. There isn’t. The blow-out passes and I am greeted on the surface by a dozen dead crows and various other creatures. Feels like the end of the world.