Possibly the most delicious fruit on the planet, vying with raspberries. Which, funnily enough, this blood orange had hints of flavour from raspberries just plain old “built-in”.

A sharp knife is critical to cutting peel and pith off the flesh. That’s a knife from a 6 dollar set of 6, so a 1 dollar knife, and it is almost shaving sharp.

Look at the colour! Gorgeous.

Securing a contract has  me dreaming of a new bike. It would start off like this but have a Rohloff internal gear hub added in. I think it’d be damned sexy and run like a dream.

So the next best thing comes to mind. A lugged cro-mo steel frame, modified for belt drive, with disc-brakes and lots of bidons for guards, racks, and such. Something like the Americano Rohloff, below, but with a nice Rivendell style lugged frame & trekking bars.

What is a minor bummer, the Rohloff shifter only comes in twist type – like a Nexus. I’d much rather a rapid-fire type shifter like the Alfine and almost all the Shimano mountain-bike stuff.

Guess this will all stay a dream for some time.

Riding in the rain is something that will make most people reach for their car keys. If you can make the mental resolution that it’s just water, albeit cold, and that with the right gear you won’t get appreciably wet then riding in the rain is no problem at all.

For me it’s better than a nice day because there are less riders out on the bike-paths. Riding on a nice day is a social activity, so don’t get me wrong, it’s that I like having the peace of the empty bike-paths when riding in the rain because it’s more personal. Riding in adverse weather intensifies the solo experience of being a cyclist; which I think is part of why people like it. Just rider and machine against weather and terrain.

So what equipment makes riding in the rain achievable or even enjoyable?

Next time you would like to ride but look outside and see it raining realise that you can get out in it anyway and even enjoy it. A little bit of equipment will keep  you dry and therefore warm. For me, the jacket and booties are enough unless it’s very cold and I need to add gloves.

After all – rain is just water.

Riding in the Wet

After reading an inspiring article on Rivendell Bikes about the greatness of merino clothing I took a chance, dropped over $50 on a base-layer and tried it out. I have not looked back. Modern merino superfine fabric is smooth, doesn’t itch, and retains little (if any) odour.

My first purchase was an Orca base-layer long sleeve.

Next was an Orca mid-layer and short-sleeve base-layer.

Last was an Icebreaker mid-layer longsleeve and a pair of trunk undies.

Every purchase was worth every cent.

Cycling was where the material really stood out. On a very cold morning I rode into work, 33kms, and had a puncture. I stopped and changed out the tube. At the time, about 70% of the distance, I was feeling slightly damp. When I took of my waterproof jacket steam was rising about my body. The cotton long-T was damp and it seemed the merino wicked all the moisture off my skin – that moisture in turn absorbed by the cotton long-T. After changing out the tube I realised that the merino against my skin was not in the slight bit damp.

For cycling merino is the best material I’ve found for against the skin. I’ve yet to try my merino trunks on the bike for anything more than 15 minutes so I can’t comment on its performance on long rides with those parts of your body that connect with the saddle.

The Surly Big Dummy continues to please. Took it to a local big-box hardware store and came back with a decent load. Probably the largest load in size and density; with a 10litre (2.25 gallons) can of paint and four  2metre (6ft6in) lengths of decking. With the bungy cord cargo net it worked a treat. Although I rode cautiously because of the load all the cargo behaved itself over various bumps for roughly 2kms (1.5miles). Check out the pictures. 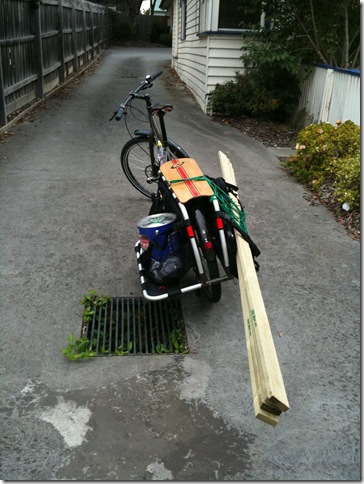 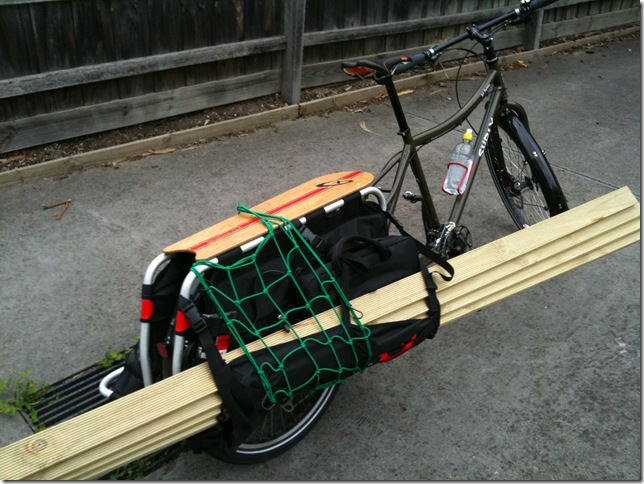 It was great fun and it really drives home to my wife just how useful this bike is.

What’s long, green, a little heavy, great fun and has the potential to change your life?

It’s the Surly Big Dummy. A long-bike or cargo-bike it could have many classifications. What appeals to me the most is how fun it is to ride.

Now that I’ve had it for a few months I have a much better idea of the bike’s intricacies and handling.

In short I love it. My wife loves it. It’s starting to change our lives. Where we’d normally drive to the shops we get on our bikes and ride. When I feel like a ride and my wife’s a bit tired I take her on the back and that means we’re together and I get a decent ‘work-out’ on the bike. All this cycling is changing her, too. She’s excited to ride and has purchased a new Avanti Metro 8.

My (our?) main use for it is shopping but I also enjoy commuting to work upon the big green carrier. My work-commute is 67kms round trip and I spend about 2 hours 40 minutes in the saddle. The handling is very nice. Moderately relaxed steering geometry only becomes twitchy on tight corners. Frame geometry is configured toward upright riding: think town-bike or Amsterdam-bike. It’s no problem to get the bike through the anti-bike devices that guard bike-paths around Melbourne. I’ve never clipped anything whilst riding it. Any clipping of objects is done whilst wheeling the bike: usually coming in the back door.

There’s enough space to carry a brand-new, in box, 6 litre slow cooker; without the wideloaders. I’d be hesitant to do this sans-cargo net, though. My trip was successful because of the cargo net. 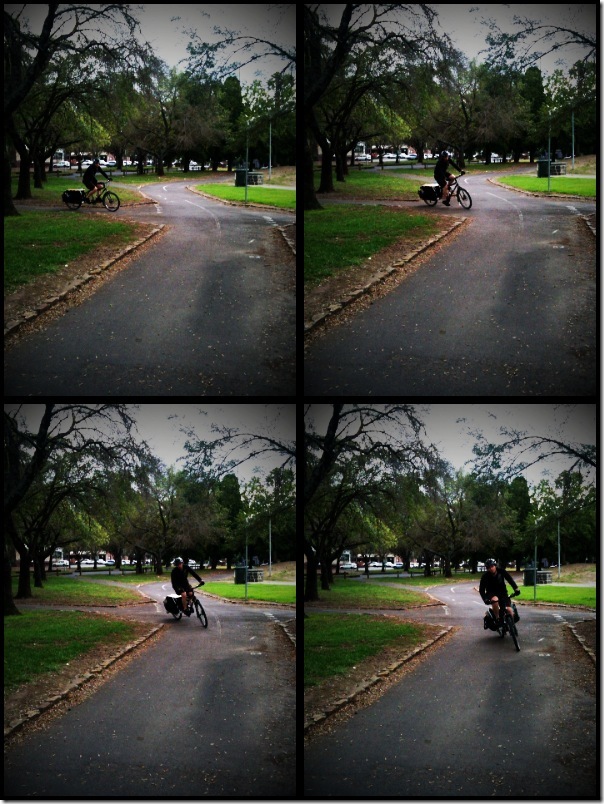 If you have a modicum of fitness you won’t be particularly slowed by the Big Dummy rolling on Schwalbe Big Apple tyres at 60psi. I’ve found that it only slows me about 1-2kph compared to my Cannondale Bad Boy 8 on Continental Sport Contact tyres at 90psi. The weight of the Big Dummy is about the same as a low-end steel frame hybrid: one of those over sized steel-tube ones that are built to look like they’re aluminium but are just plain mild steel.

Having my wife ride on the snap-deck is really good fun and great resistance training. It lets you find out what your knees can handle. It’s also really nice to be able to have her right next to me and able to chat regardless of how hard I want to ride (but she doesn’t like it when I take the bike faster than about 30kph). It may be read as a slight against her but she’s the heaviest load, with shopping, that I’ve taken on the Big Dummy. Including the shopping I’m estimating about 85kgs. Added to my 90kgs the bike was close to its stated limit of 180kgs. I didn’t find this difficult until a hill near home that is about 5% gradient for 300metres or so. Then I felt it on my knees. If anyone thinks that’s the bike they’re wrong: it’s clearly my gear choice &/or fitness level. I wouldn’t want to carry much more than that on the Big Dummy and agree with its stated weight limits. If one was to want a bike with higher loads then consider the Yuba Mundo.

It’s in my nature to think of ways to improve things. The Big Dummy has few additions or modifications that I’d make. They are:

…and mini-review of Surly Big Dummy

Took the Surly Big Dummy to the farmers’ market today. Gave my wife a dink there and back. Loaded up with our weekly shop and the special shop from the supermarket (for things not at the farmers’ market; like cream). It was a nice ride, lovely weather, and lots of fun having my wife with me. She loved it and had a smile on her face all the way there and back. On the return she even rang her sister whilst I was riding.

Under load the big dummy has a little bit of tyre squirm but the deflection in the tyre shape was totally acceptable. The frame was very ridgid: never felt it flex or wobble. We did experience some chain scrape on the rear SKS fender (26-inch, 65mm width) which surprised me because the fender is cut-out to allow clearance for the chain. Will have to test if the Dremel can take off the material in an acceptable manner and correct if possible.

Next Big Dummy ride will likely be a work-commute.